"...the word of God came to John son of Zechariah in the wilderness. He went into all the region around the Jordan, proclaiming a baptism of repentance for the forgiveness of sins..."
(Excerpt from Luke 3: 1-6.) 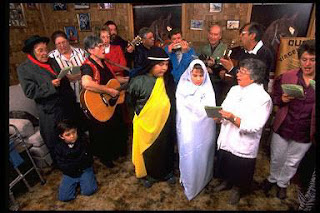 Advent is called a season of preparation. It is supposed to prepare the faithful for the coming of Christmas.  Advent is supposed to be a penitent season (that is, a time for repenting) like Lent. According to this way of thinking, Christians are supposed to spend time searching their souls looking for their own sinfulness, acknowledge their sins before God and then prayerfully ask God to help them change.

However, different cultures have a different understanding of Advent. In Mexico and some other Spanish-speaking countries, for example, Christians prepare for Christmas through a 400-year-old custom called "Las Posadas," a celebration that lasts for nine days, beginning on December 16 and going through December 24. Las Posadas involves people processing through town behind a couple dressed as Mary and Joseph. The procession stops at a different house or church each night and enacts the story of Mary and Joseph trying to get lodging. Unlike in the real Christmas story, eventually the holy couple are accepted, and the entire procession joins in a time of feasting, often partying until the wee hours.

While this particular custom may seem unusual to those of us who did not grow up with it, most of us in the United States find ourselves spending many days and evenings in December partying with various configurations of friends and acquaintances, usually with no mention made of the idea that the Advent season is a journey that takes us from our ordinary lives to the extraordinary event that is Christmas.

Las Posadas focuses on a particular sin in the Christmas story--the sin of inhospitality. This may be one of the reasons that the Latin culture, much like the culture of the Middle East, is known for its hospitality. There are other sins in the Christmas story that we can focus on in the Advent Season as well, but the sin of inhospitality seems like a pretty good one for our culture as well. As you go about your Christmas-season rounds of visiting, partying, shopping and gifting, take a moment and think about who is being included and who is not being included in your holiday preparations and merry-making. Clearly we can't include everyone in the entire world on our Christmas gift list, but by expanding our circle of hospitality, we enlarge our hearts and enrich our lives.

Posted by Denise Clapsaddle at 2:24 PM