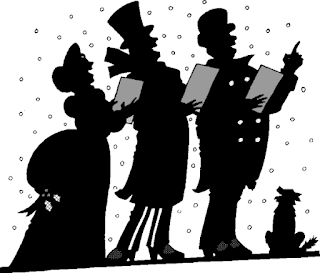 Slate online magazine has a story about the history of Christmas Carols today. It's a question most of us have probably never asked--why do we sing special songs for Christmas? The history, as you can imagine, is long and convoluted:
Although there are accounts of birth-of-Christ hymns being sung in second-century Rome—by order of Christian authorities, not public preference—it was not until the fourth century, when Christmas was formalized as a feast and fixed to Dec. 25, that a songbook started to take form. Some of the first contributions were existing, non-Christian carols adapted to the new celebration. The early church did not appreciate these pagan-Christian conversions and answered with hymns of its own.

Sounds sort of grim, doesn't it? But things got better, thanks to our old friend the patron Saint of Animals, St. Francis:

In the 13th century, Francis tried to break the Christmas celebration from its tedious husk, mostly by making the birth of Christ into a live theatrical event. He organized nativity pageants featuring real hay, real animals, and, for the first time, real music: Deviating from tradition, he allowed for narrative songs in audiences’ native languages, turning Christmas music into an opportunity for mainstream creativity. Drinking songs were given Yuletide lyrics (greatly to the church’s horror) and disseminated by traveling entertainers. Christmas began to take on a life of its own, beyond the exigencies of the sacred feast.

There's more to the story...much more, in fact, including how the Puritans did away with the excesses of Christmas, including caroling, and how Charles Dickens helped to encourage a merry celebration of Christmas through his short story "A Christmas Carol."

At Riverton Church we love Christmas music and it is always a struggle to figure out which ones we should sing on Christmas Eve, which is when we have the highest attendance of the Christmas season. Silent Night is a must, of course, but there are too many favorites to include them all.

If you want to find out what we will be singing this Christmas Eve, our service is at 7:30 p.m. and all are welcome. We try to make the service equally memorable and enjoyable to those who come every week and those for whom it is their first time.

Posted by Denise Clapsaddle at 3:19 PM