Math and God in Three Persons 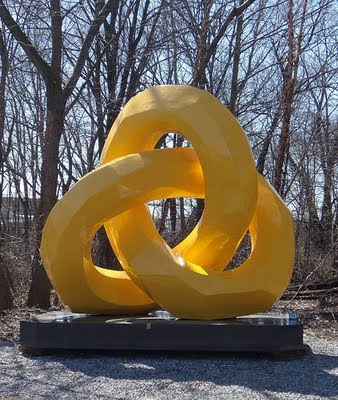 This coming Sunday, the Sunday after Pentecost, is known as Trinity Sunday. The Christian understanding of God is that God expresses Godself in three persons--the Father (Creator), the son (Redeemer) and the Holy Spirit (Comforter.) These three aspects of God appear in the Bible, but the word we use for the concept that describes it--Trinity--does not. While churches in the Congregational tradition tend not to push rigid understandings of doctrines like the Concept of the Holy Trinity among their members, it is also not fair to call members of our denomination, the United Church of Christ, by the commonly-hurled insult "Unitarians Considering Christ."
The simple fact is that the Trinity is a mystery. Anyone who claims to understand the concept of the Trinity is denying the very nature of the Trinity, which is mystery. Mysteries cannot be explained but they can be embraced.
Another thing I don't fully understand is higher math, but I think that if I did understand it, the math concept called the Trefoil knot would help me to get a greater handle on the mystery of the Trinity. According to Wikipedia, "The trefoil can be obtained by joining together the two loose ends of a common overhand knot, resulting in a knotted loop. As the simplest knot, the trefoil is fundamental to the study of mathematical knot theory, which has diverse applications in topology, geometry, physics and chemistry." The knot, by appearance, has three separate loops, but when you look closely you see that it is one whole, connected.
For the children's sermon on Trinity Sunday I usually take a little strip of paper, knot it, connect the loops and tape them together--Voila, the Trefoil knot. So simple, and yet so fascinating, like the mystery that is the Trinity. And what do I say? Sometimes in church I think we worry too much about explaining everything, rather than helping our children be drawn into the mystery, which is compelling. I remember as a child when I discovered the mobius, a similar mathematical twist, how I obsessed over it. Why not just let the children make their own trefoils and ponder them, each in their individual ways?
Posted by Denise Clapsaddle at 8:16 AM