What are you, some kind of animal? 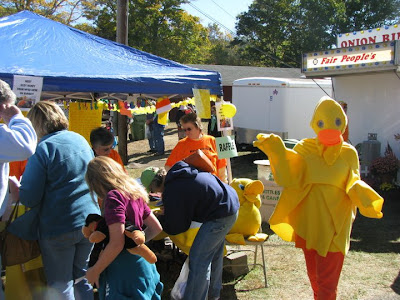 Early on in my ministry at Riverton Church I learned that most of our members are heavily involved in the annual Riverton Fair, a large fair held on the second weekend of October. Wanting to participate in some way, my first year at Riverton I baked some cookies, affixed a label with information about the fair, and passed them out on the main fairway. The next year I planned to do the same (except with purchased candy--it takes a long time to bake cookies for a fair that has about 20,000 visitors annually) when I spied a cow costume while shopping one day. That year marked my first as a fair "animal." In subsequent years the church began to host a duck race fundraiser at the fair, so I switched to dressing like a duck.
From the start people remarked upon my bravery for stepping out in public dressed as a large farm animal. From the outside it might look brave, but the view from inside the costume is very different. When I walk around as just-plain-me children don't jump up and down with excitement at my approach and tug their parent's sleeves to have a look at me. I don't get asked to pose for photos with dozens of people. Even though you can't see my face in these pictures, I assure you that I'm smiling down to my toes. Yes, I'm uncomfortably hot in the costume much of the time, and the visibility is poor, but the opportunity to be a human day-brightener, even in a small way, makes it well worth it. It makes me realize how much we as people can do to spread joy to each other when we take the time to make the effort. When I'm a duck I make an effort to be friendly to everyone I see. When I hear music I like I sway and dance. In real life I can be more shy and retiring. The fair is over for another year and I'm back to being just-plain-me again, but I'm going to try to bring my duck attitude into my regular life.

Posted by Denise Clapsaddle at 10:56 AM